Home Activism2020 Anti-Terror Law: What’s Going On in the Philippines and Why You Should Care

2020 Anti-Terror Law: What’s Going On in the Philippines and Why You Should Care 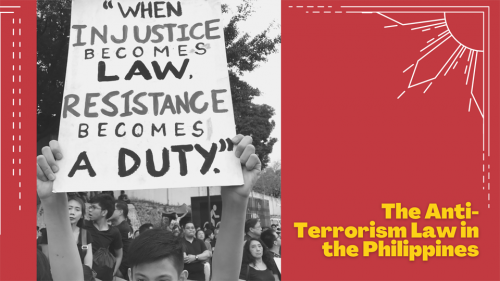 The letter of the law is vague around the exact definition of “terrorism” and claims that the purpose is to “condemn terrorism as inimical and dangerous to the national security of the country and the welfare of the people.” Like the American “war on terrorism” following 9/11, the act aims to divide those who are loyal to the government (i.e., the Duterte administration) from those who dare to dissent.

More nefariously, the new law’s jurisdiction includes social media (tweets, Facebook posts, Instagram photos, etc.), blog posts, news articles, virtual protests, and all other public political actions deemed contrary to the government. If a person is flagged as a “terrorist,” the law grants the government the right to conduct up to 60 days of surveillance and for law enforcement to make warrantless arrests, as well as detain said offenders for up to 24 days before and/or without pressing charges. If convicted, lawbreakers face the possibility of lifetime imprisonment as punishment. Essentially, it’s a modern-day, coded version of martial law: a kind of governance the country is very much familiar with.

Now a month and a half after being enacted into law, we have already witnessed several acts and threats of imposition that violate civil rights and disregard the wellbeing and lives of human rights advocates and activists at large.

This list continues to grow with every day this law presides over our civil liberties.

Moreover, kasamas across the globe are forced to weigh the importance of our right to freely express ourselves against the risk of being punished for doing so. Dissenting and offering rebuttals to colonization, facist regimes, and outside influence is nothing new for the Filipino people. For example, Gabriela Silang became a national icon in the 18th century when the archipelago was under Spanish rule; she lost her husband, revolutionary leader Diego Silang, to political violence and resumed his position in leading the revolts. Although Silang is known as the first Pinay to lead an uprising, there are many other Filipino women and men who have bravely fought against oppressive forces and often lost their lives to the cause, which we still see taking place today.

The Philippines has experienced colonization three times over and is still influenced by the not-so-invisible hand of American imperialism. Ever since the Philippines was granted its  “independence,” dynastic political families continue to command and control the government in ways that stifle and corrupt the democratic structure. At every point, the Filipino people have made great efforts to combat these oppressive regimes, making politically-charged dissent an important part of the Filipino identity.

Yet as fear spreads and infects our organizations and communities, conversations about “What it means to be Filipino” that help us understand and explore our own identities will become less and less accessible. This kind of cultural starvation directly affects our shared perspective of the Filipinx’ worth and ability, and sets us up to endure yet even more generational trauma.

How do we embrace and honor our Pinoy history, culture and identity?

Despite overcoming the Marcos dictatorship, our history has been rewritten in ways that hinder millennials in both the Philippines and abroad from learning about our revolutionary past. Some even believe that martial law was a successful tactic that had no ill-intent, and that it was how President Ferdinand Marcos successfully whipped the nation into shape in order “to instill peace.”

These are the fallout effects from several rounds of colonization that have tarnished our collective conviction in our autonomous ability. They thread together a design that insinuates our colonizers were our saviors, fueling the desire to assimilate and join the rat race in order to achieve the white picket fence and high-powered career. This mentality globally victimizes nearly every group of previously colonized people as a way to maintain the inequality gap we see today and ensure the positioning of the top one percent. Coincidentally, it’s this same mentality that causes us to loathe the part of ourselves that will always set us apart no matter how hard we try to blend in: our Filipinx DNA.

Within the Filipino-American community, so many of us feel disconnected from our roots by way of the history of assimilation. However, for many of our elders, assimilation was the survival mechanism necessary to escape a life of impasse in the Philippines and pursue newfound opportunities overseas. This conditioned way of life perpetuated by “post”-colonial systems and institutions keeps us stuck on the same hamster wheel as our elders, working to “Keep up with the Joneses.” Today, the power to compose our story lies in the hands of egocentric, authoritarian leaders who decide how our story is crafted by refusing to adhere to the rules of a true democracy.

As Filipinx, whether we reside in the Motherland or have settled somewhere in the diaspora, it’s our responsibility to deconstruct harmful/toxic thought and behavior patterns from our conditioning that plague our kapwa. We have to hold space for both our similarities and our differences; and extend ourselves to lift up those who don’t have the same access/resources we do.

At this particular time, American citizens can especially empathize with the fear and danger that seethes through the archipelago, as we — Asian Americans, Filipinx Americans, the perpetual immigrant — experience a minute taste of having our own privileged, American “rights” being censored in strangely similar ways. Here and back home, realities are being rewritten and scapegoats are being wrongly accused, whether it be about COVID-19 or the dangers of communist ideologies.

There’s no denying the similarities between the presidents, Trump and Duterte, in terms of their etiquette and leadership style. From taking aggressive measures to silence dissent; creating an “us vs. them” narrative in public speeches and statements; mirroring rigged elections and voter suppression involvement in both of their presidential campaigns; to finally their lack of urgency/response to the current COVID-19 pandemic; we easily see just how similar and aligned they are.

The ability to openly express our thoughts, feelings and opinions is at the heart of American culture. So much so, we forget that not all democratic countries establish this type of relationship with their citizens. Moreover, our right to free speech has been assumed as a part of our autonomous development; which has only been made possible through our grueling history of Civil Rights Movements led by Black America. In the ’60s and ’70s, brave men and women exercised their sovereign rights through displays of resistance in response to systemic racial injustice, paving the path for a more equitable life today. Just as the current Black Lives Matter Movement in America will depict our generation to future ones, so will the National Democratic Movement in the Philippines. Like the United States, the Philippines also harbors an unspoken civil rights history that laid the groundwork for People Power activists who worked diligently to oust President Marcos in 1986, and have since developed their own political party through community organizing that continue to move the needle forward today.

By forefronting empathy, we can realize the interrelationship of these alarming issues that both Filipinx and Filipinx Americans face in their respective cultures, and how these issues are not only prevalent in these two countries. Around the world, we have seen the way that people’s voices can highlight and push for progress, such as the Thailand democracy protests. The Global South and those struggling against the weight of systemic oppression are all connected through parallel struggles, and can increase our capacity for resilience when dealing with challenging situations by exercising resistance & solidarity. We can use both of these as tools to infuse hope into the dying beasts of democracy in both America and the Philippines, and to recapture our influence on how our historical narrative is crafted through this time.

What can we do about it?

We must stand with our kuyas and ates in the Motherland. Despite being an ocean away, we must utilize our ability to raise our voices in a moment when those residing in the Philippines cannot.

How can we authentically plug into the present moment and offer ourselves to this global outcry for resistance and solidarity?

We live in a world where limited representation translates to limited opportunity. Many privileges we’ve taken for granted living here in the United States — like voting, demonstrating and critiquing our government — are in imminent danger now more blatantly than ever before. Whether it’s the federal forces that assaulted Portland protestors or the government attack on the USPS, there are plenty of news sources for growing empathy with what is going on in the Philippines.

As long as we continue to idly standby, these facist attempts will only get bolder and more convoluted; encouraging us not to “rock the boat.” As members of the AAPI community or allies to it, let’s make sure we’re shaping our part of history-in-the-making to reflect the narratives of our own ethics and experience, rather than those of the authoritarian leaders using our countries as vehicles to feed their own self-interest.